How do we construct ideas and stories?

Trust and the Blockchain

How Blockchain could change the world

A new digital home for CONNAXIS

Google Adwords renewed; Are you prepared?

The difference between being online and winning online

Let´s make magic: The advent of the trustless economy

Handle all your company's notifications with a Yo

Why is it important to have a presence in social networks?

The importance of adapting the message to the advertising medium

Google Adwords vs Facebook Ads: When to use each one?

Let´s make magic: The advent of the trustless economy

The world will never be the same after the financial crisis of 2008. Luckily a solution is already there. New ways to think.

The world will never be the same after the financial crash of 2008. Everybody still remembers, that the people we were supposed to trust, could not be trusted in the end. People that were supposed to be the guardians of our money showed that they were completely irresponsible and, above all, greedy. They knew very well that they were playing with fire by giving mortgages to people that could not afford them. They repackaged the bad loans as if they were full proof investments. When the crash finally came these bankers stopped trusting each other and inter-bank lending came to a complete stand still. The world skipped a heartbeat. We were close to a complete meltdown of the financial system. The same people that were defrauded, had to bail the bankers out. What an irony. Too big to fail they said.

Since then, the world population has understood that people in key positions, be it bankers or politicians, think of themselves first. People do no longer trust people in authority and this is completely to blame on the abuses of these same people. Greed is clearly stronger than fear. 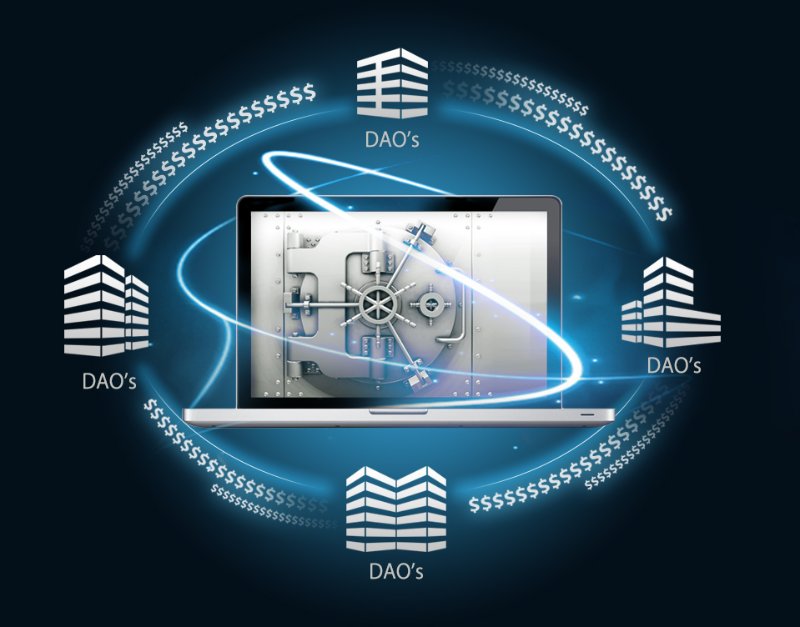 Luckily a solution is already there to deal with this problem. With this solution people no longer need to trust on the integrity of key people in power. It is a new trustless economy based on a technological breakthrough called the blockchain. The technology has a few key features and advantages. It is based on rules that cannot be altered and are stored in the blockchain. Therefore it does not have a central authority. The network cannot go down. The current state is replicated on thousands of computers simultaneously in real time. Last but not least, the transaction costs are extremely low.

This new technology allows everyone to store money in cryptocurrency in a wallet on their smart phone and do business with these new trustless entities. These new businesses are called ´decentralised autonomous organisations´ or short DAO´s. With these DAO´s people can, for example, invest, lend and store money. We are sure that bankers did not see this one coming! Via your wallet you can enter in so called smart contracts with the various DAO´s. Let´s look at a few DAO´s and their properties:

On OPEN LEDGER you can buy a token called Obits. If you hold these tokens you will make a small dividend on all transaction done on the Open Ledger exchange. You can imagine that the amount of transactions will grow over the years while people discover the Blockchain and its various tokens.

On DIGIXDAO you can buy yourself into the market of physical gold via gold tokens. By holding DIGIXDAO tokens you will be part of their business. You will be make money on all gold transactions done on DGX worldwide.

On MAKER, provides a stable coin called DAI. You can buy MAKER which is the DAO underlying DAI. The profit generated from transactions in DAI will be used to buy up Makers. These will then be destroyed periodically. This will make sure that your Maker holdings will constantly appreciate.

On SLOCK.IT you can buy yourself into the future of the Internet of Things (IoT). They are soon to launch a DAO which will make you part of this new exciting business. With Slock.it you can easily rent out your bike, car, apartment through the installation of smart locks connected to the blockchain.

This new technology, which is based upon the Ethereum Blockchain platform, will be a revolution. A few billion people, that have no access now, will become active economic participants. They will have access to banking, borrowing and investment possibilities which were denied to them before because of high transaction costs. Transactions cost will go down drastically. Most importantly, people do not have to put their trust anymore in other people to manage their assets. The bankers and politicians have a new competitor in the form of DAO´s.

The game is on. People have a choice again. If you are defrauded in the future by the bank or the government you could have known better.

Such is the magic of this new technology that it liberates us from the need to trust people to manage our assets.

The internet gave us a common platform to connect. The ecosystem of applications on top of the internet gave us endless accessibility to information, learning and services. Open source software lowered barriers to entry to the power of software and, now, the blockchain will stop the dependence of people needing other people to guard their assets. The force of digital technology to create Magic and improve people's lives is boundless.

Connaxis is focussed on bringing magic to your company. Let's see if we can also help your business profit from this new trustless economy.

We use cookies to personalise content and ads, to provide social media features and to analyse our traffic. You consent to our cookies if you continue to use our website.
If you want to disallow some cookies, please unbox the following checkboxes and apply the changes.